I used to be all about a Mustang Mach 1 or or a 71 Cuda or a new Corvette Z06. All aggression and sexual thrust. A shark, leaping out of the water, with gnashing teeth, ready to ram 3000 pounds of death into anything unfortunate enough to get in its way.

Now the car I want and deserve to drive is a black 1963 Lincoln Continental. The kind of car that would would slip along in the dark, undetected but deceptively powerful, like a nuclear submarine. Smelling like oiled leather and good rye whiskey and carefully measured conversation. Perhaps the lingering aroma of conservatively applied perfume and feminine excitement encased in a black, leather lined steel coffin, sailing through space.

I will have it one day.

In one of my stories (The Death Game) I explore a bit into the idea of cars and the way people use them to define their place in life. How they work as personal symbols or totems. The story takes place in the ’70s, and one character (there are only two, really, and they’re both immortal) was around to witness the rise of the automobile in America. She drives a white 1965 Cadillac Eldorado with a red interior. 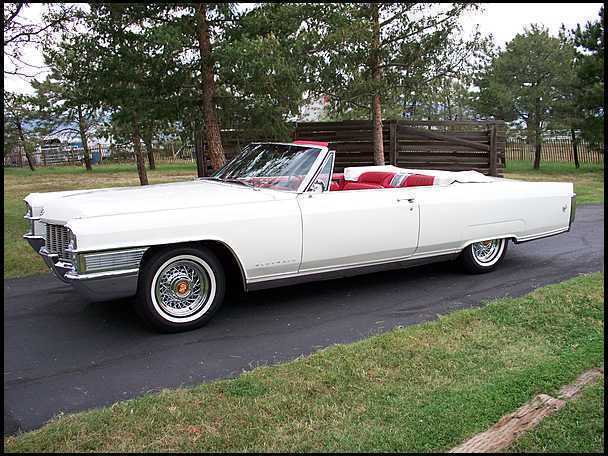 I chose that car because it suits her aesthetic. Even though the story takes place in the ’70s, her style and awareness of culture petered out somewhere in the late ’50s, early ’60s. I wanted her to appear somewhat out of sync with the rest of the world. The character appears in a number of my stories, and at this point, she’s taken on a young apprentice. A 16 year old girl, who has only recently been made immortal (it’s a vampire story) and the story is about the two of them living together in a suburb outside of Flagstaff Arizona, and using increasingly elaborate forms of suicide as a way to entertain themselves. The story is called The Death Game, because that’s what they call what they’re doing. It follows five “deaths” and through each one, we watch as their relationship deteriorates.

The reason I bring it up is because one of the deaths (the second to last) features Caroline (the woman with the white 65 Cadillac) driving a stolen 1971 Barracuda at full speed into a rock wall. Though I didn’t think about it specifically when I wrote it, I realize in retrospect that the character was smashing her young protege’s freedom and youth, symbolically. Even the year works out, because the two of them got together in late 1971.

There’s a bit in the story about how the invention of the automobile opened the world up for vampires. It’s weird, because I’ve never really been a car guy. I don’t know anything about how they work or which cars have which engines and which ones are better. I just know what I like stylistically and I’m interested in how they relate to culture in America.

Caroline pressed the pedal to the floor and the Barracuda lunged forward like a charging bull. It had been years since she’d been behind the wheel of a car with the kind of balls that Cuda had. It hurt her heart to think that she was about to destroy it. The Cadillac was a powerful car, but it was also a boat and it was designed for comfort, not pure unchecked aggression. The Barracuda was an automobile built to intimidate and show off. A machine for strutting roosters and overcompensating men who needed a mechanical dick to rev-up at anyone within earshot. This one in particular, with its yellow and black paint job like some kind of giant wasp, was just as ostentatious and mean looking as any car she’d ever seen. Caroline didn’t care about any of that. She just loved to drive fast.

It was a love she’d come by gradually and organically. Caroline was around to watch the automobile spring up into existence and stood back in amazement as the country shifted and rebuilt itself to accommodate the contraptions. She’d seen the railroads transform America from a scattered collection of outposts in the wilderness into a mechanical web of money, traveling back and forth across the country. Towns grew out of the ground around railroad tracks like vegetation on the banks of a river. That was a fascinating thing to watch happen. It was the automobile that excited her though. Cars brought all of that freedom and power to the individual.

For a vampire, a car was a doorway to a new life. Both as a vampire and as a person, she loved and respected cars. It gave them the ability to move freely in the world. Little towns and massive cities could suddenly exist anywhere a car could get to. Each one of those towns would have a number of hotels full of travelers and transient people who could be fed off of or disappear entirely without much fuss. Caroline watched all of this happen over the course of twenty years or so.

The fact that she could keep driving that Cuda west until she hit the ocean if she wanted to filled her with a sense of pride and glee. That is until she remembered that she wasn’t allowed farther west than Las Vegas. She dismissed this unpleasant thought and imagined heading east instead, tearing up Route 66 all the way up to Chicago and then over to Pennsylvania, where she was from. Caroline hadn’t been back to Pennsylvania since she first left in 1866. She wondered if there was anything left she would recognize. She guessed there probably was. America is nostalgic to a fault, and surely some of the landmarks in Pittsburgh had survived the last hundred years or so.